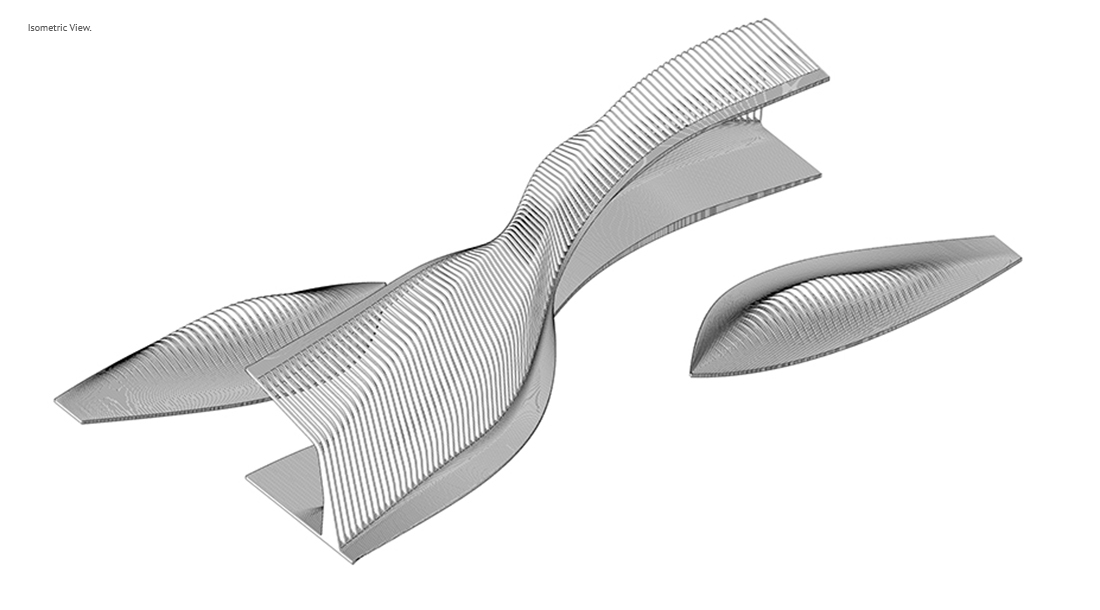 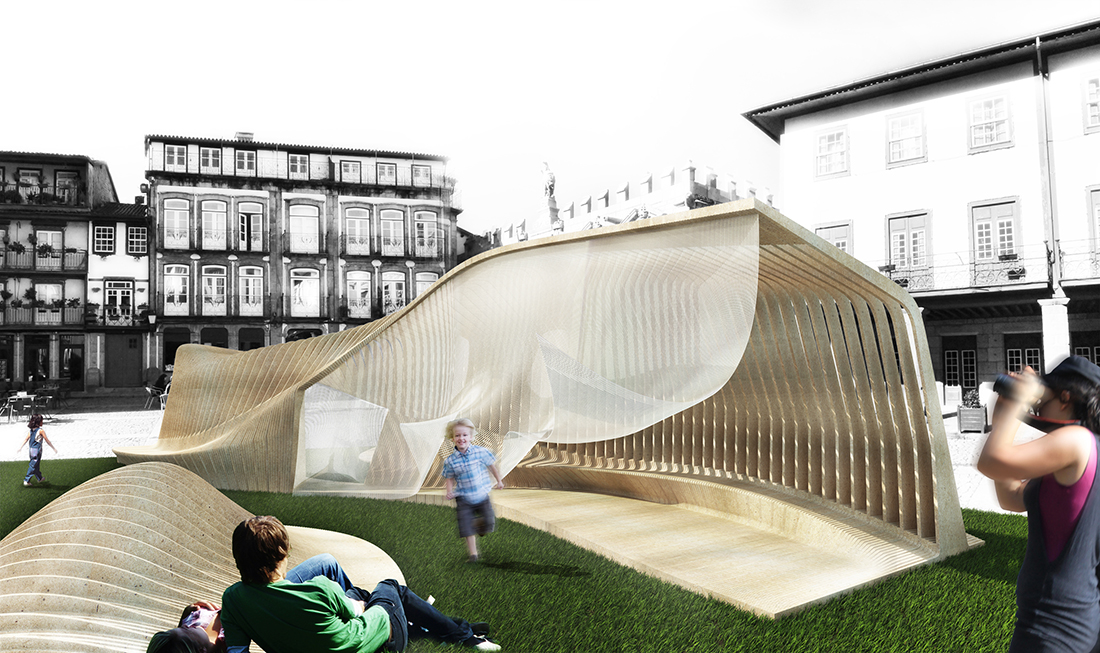 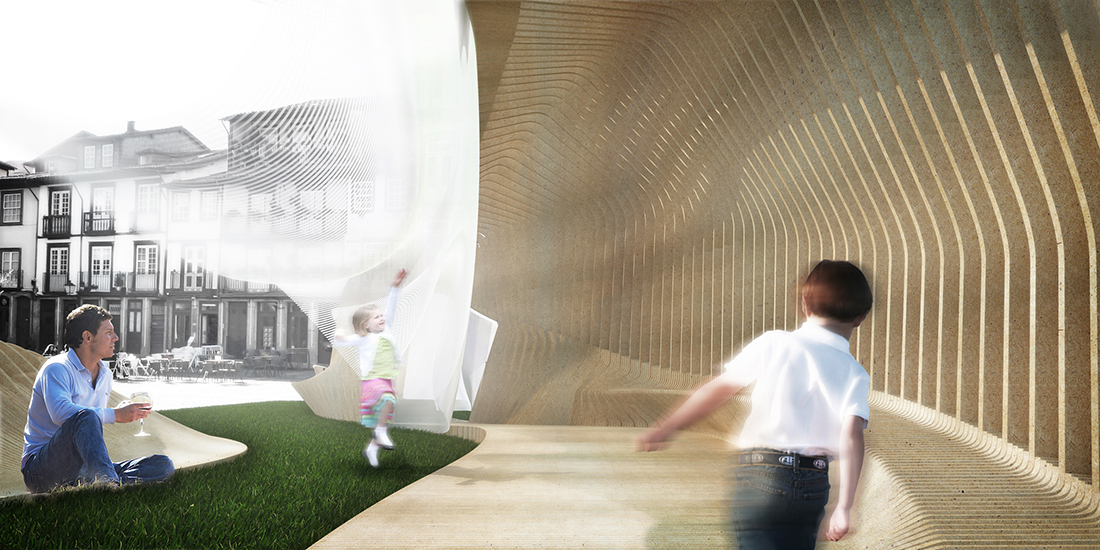 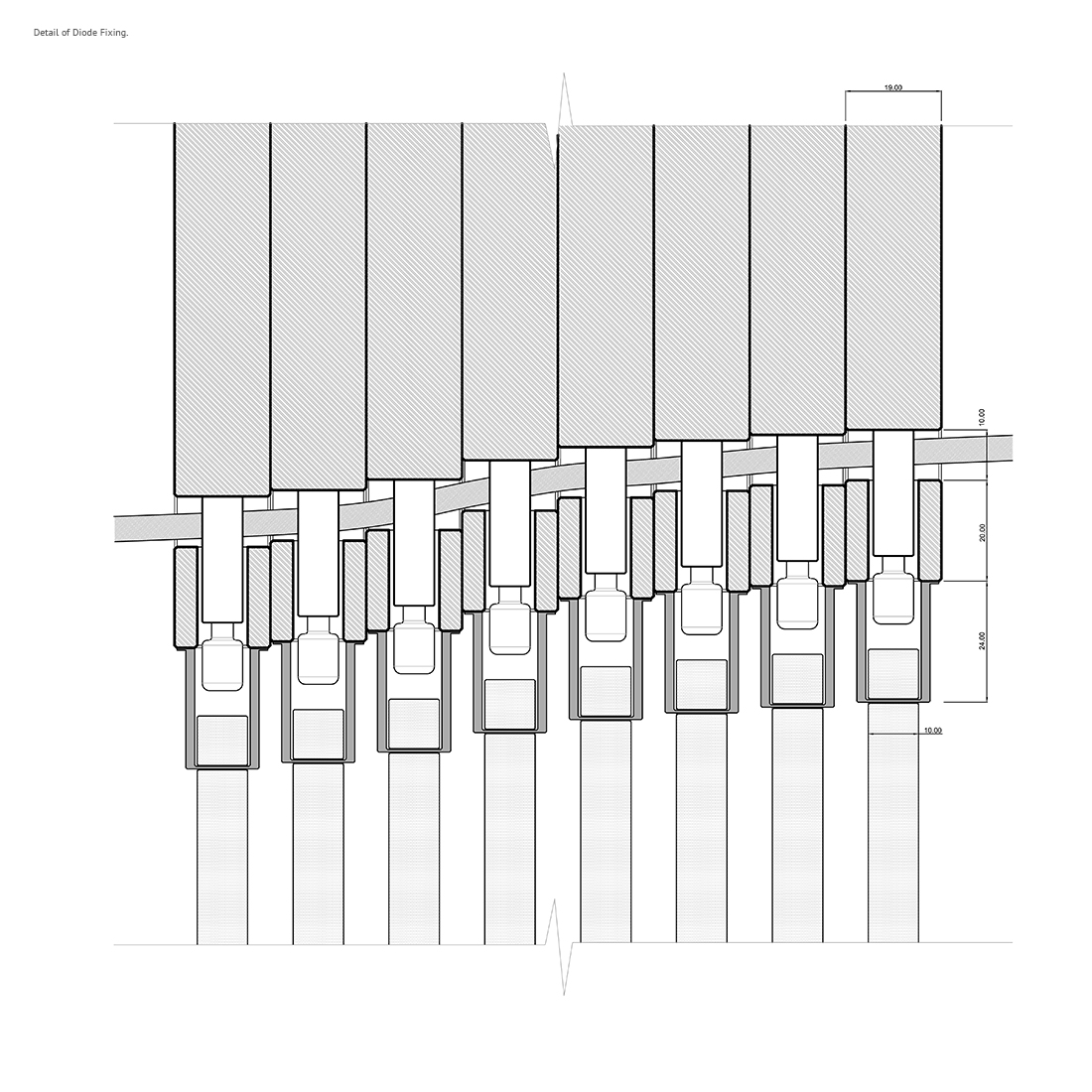 Guimarães has an intense economical and cultural activity, especially in fabrics manufacturing; cotton and linen mainly. Seeing the importance and relevance of this area for the city, this became the foundation of our research, and in turn, the primary focus of our design.

The proposal presents an interactive spatial form that mimics the twisting form of a cotton fibre through which the people of Guimarães and the visitors attending the event will perceive the city in a way that, although connects to the city in a cultural manner, does so in a very modern and striking way.
The result is a twisting form in the midst of a colorful city life, becoming an artistic celebration of a meeting moment. The interconnection between patrimony and new tendencies reactivates new attractions, perceptions, becoming a space of transformation!

The intervention is made up of CNC routed MDF panels, interconnected one after the other, each with slight different curvatures that, when joint together, create the apparently smooth, continuous surface. The surfaces are constantly changing, forming slides, seating and shading, places of relaxation, play and contemplation.

On either side there are mounds, which in plan form an interlocking weave with the main structure, where the user can use to lie down on, sit, and observe the installation from a different angle. In front of each of these mounds, draped from the main structure are fibre optic strands imitating the fringes found on many of the embroidered artworks in Guimarães.
During the night, these will form the lighting of the intervention when being lit by small diode lights immersed in the structure, allowing the strands to glow in a unison changing colour – the colours used in Guimarães embroidery.

Our structure aims to promote and share with a wider public one of the founding identities of Guimarães as a way to make people aware of such high-quality handcraft, one in constant adaptation to the demands of modern times.

The installation allows for free functional interpretation. Contrary to the common understanding and use of defined public spaces, our installation allows for free interpretation of its use, and in fact invites people to come up with unforeseen ways of interacting with it. With the apparently non-geometrical form, the undulations, twists and curves allow for private and public spaces, places to play and rest, interact and react.